So I set off on my first fully packed bike tour on Thursday after work. This is something I've been wanting to do for ages. I've been planning this in detail for months. Though this is a compromise as I originally wanted to ride from the Bruce Peninsula National Park back to Toronto. 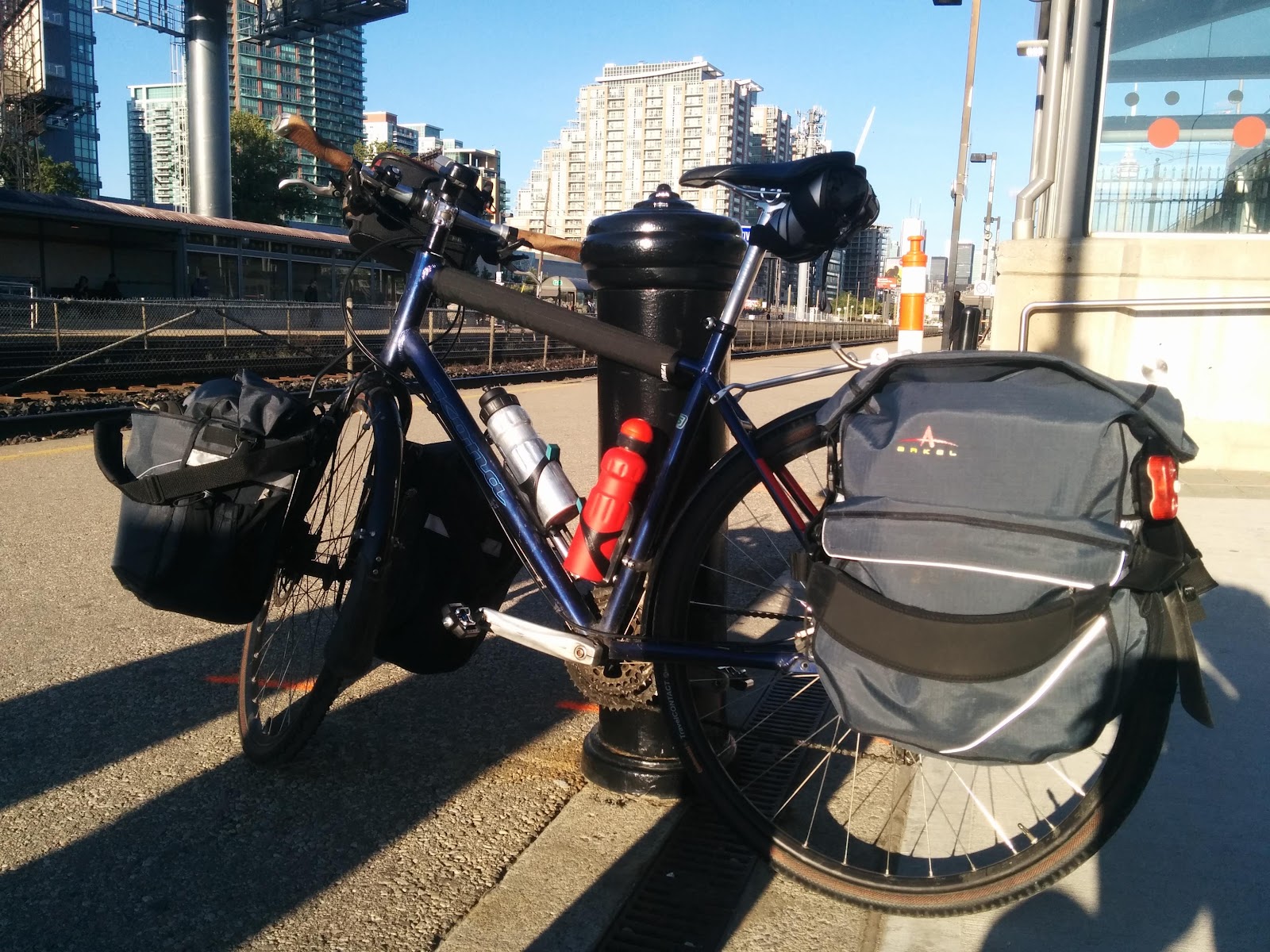 I took the Go train after work to Oshawa to bypass what is probably the worst part of a bike ride east. This also allowed me to save a vacation day. This was mostly uneventful other than frantically trying to switch trains at Union with all that baggage.

Darlington provincial park isn't very nice, mostly because you can hear the constant traffic from the 401 and the CN train line. It was also a very cold night. It went down to 2 degrees and my sleeping bag was only rated for 4. 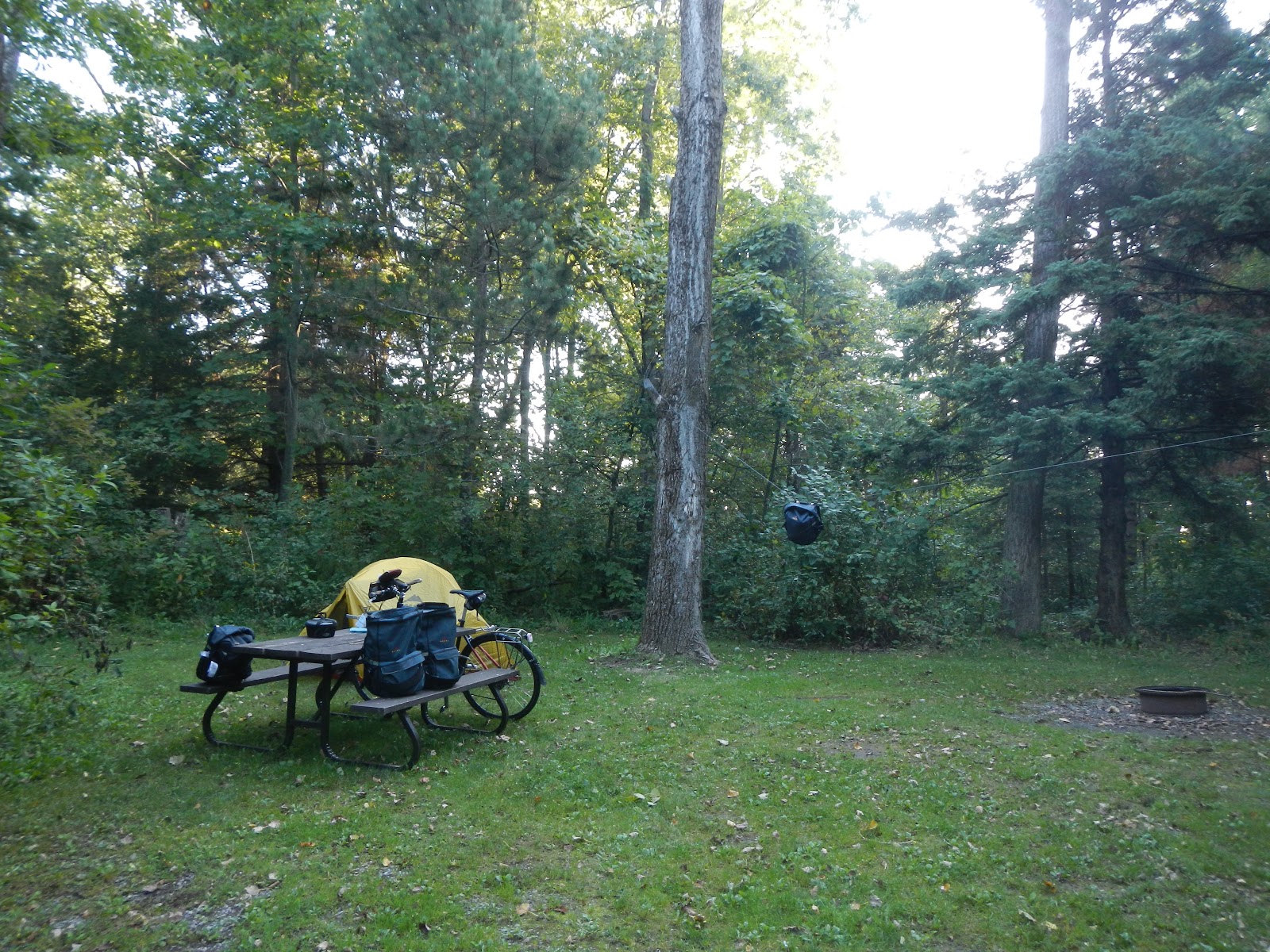 The next day was the longest distance of the tour. Just over 100kms to Presqu'ile Provincial Park. Right from the start things were not going well. OPG had closed a part of the waterfront trail, making me loose 5km. 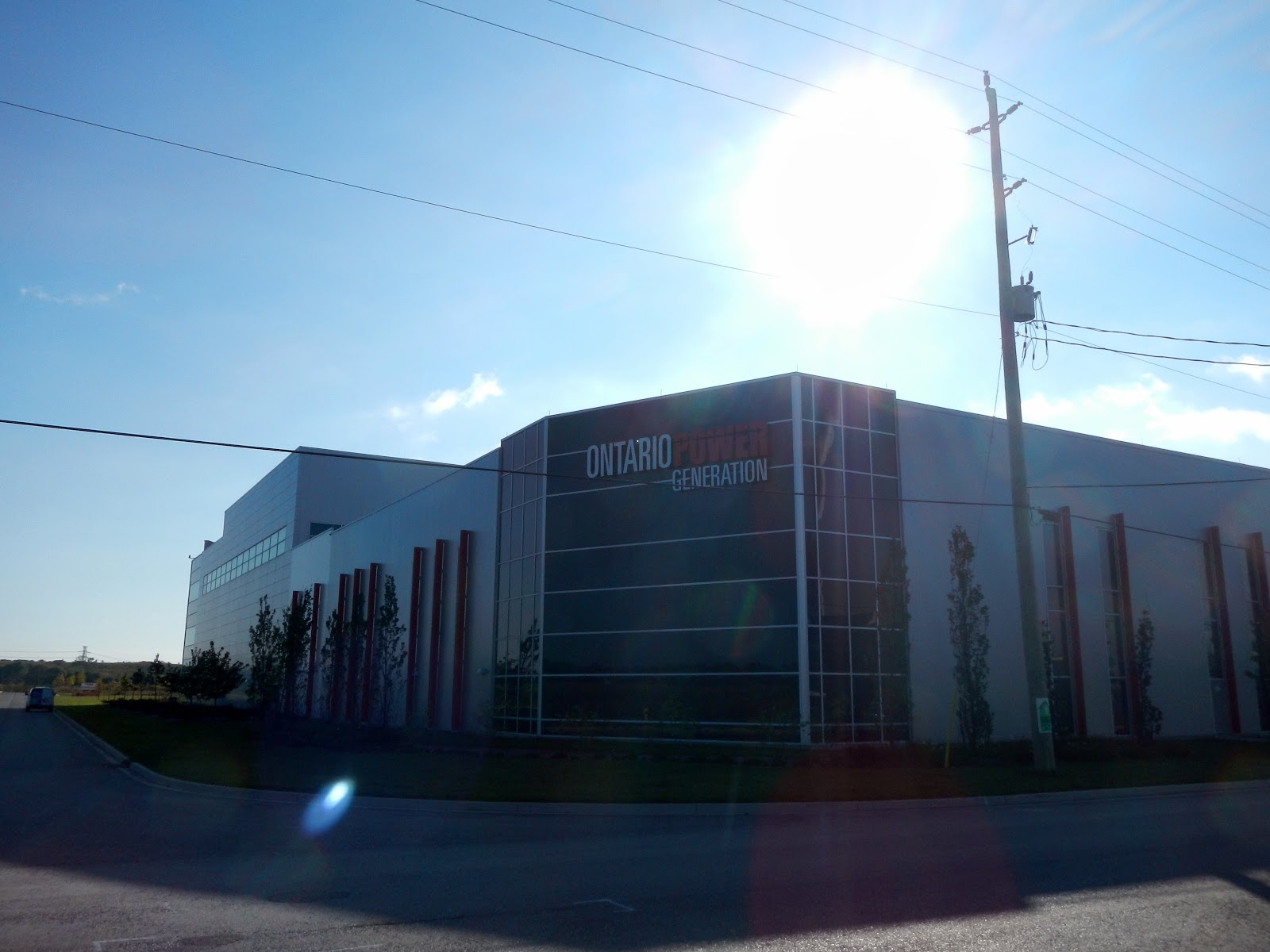 The other problem with the day was the constant head wind. Normally, you want to travel east and not west as the wind tends to come from the west. Not today. I was facing 20-30km winds all day. I had a mid way point marked out in Cobourg, which I was supposed to arrive to at 1pm. Instead, I was in Port Hope at 2pm. 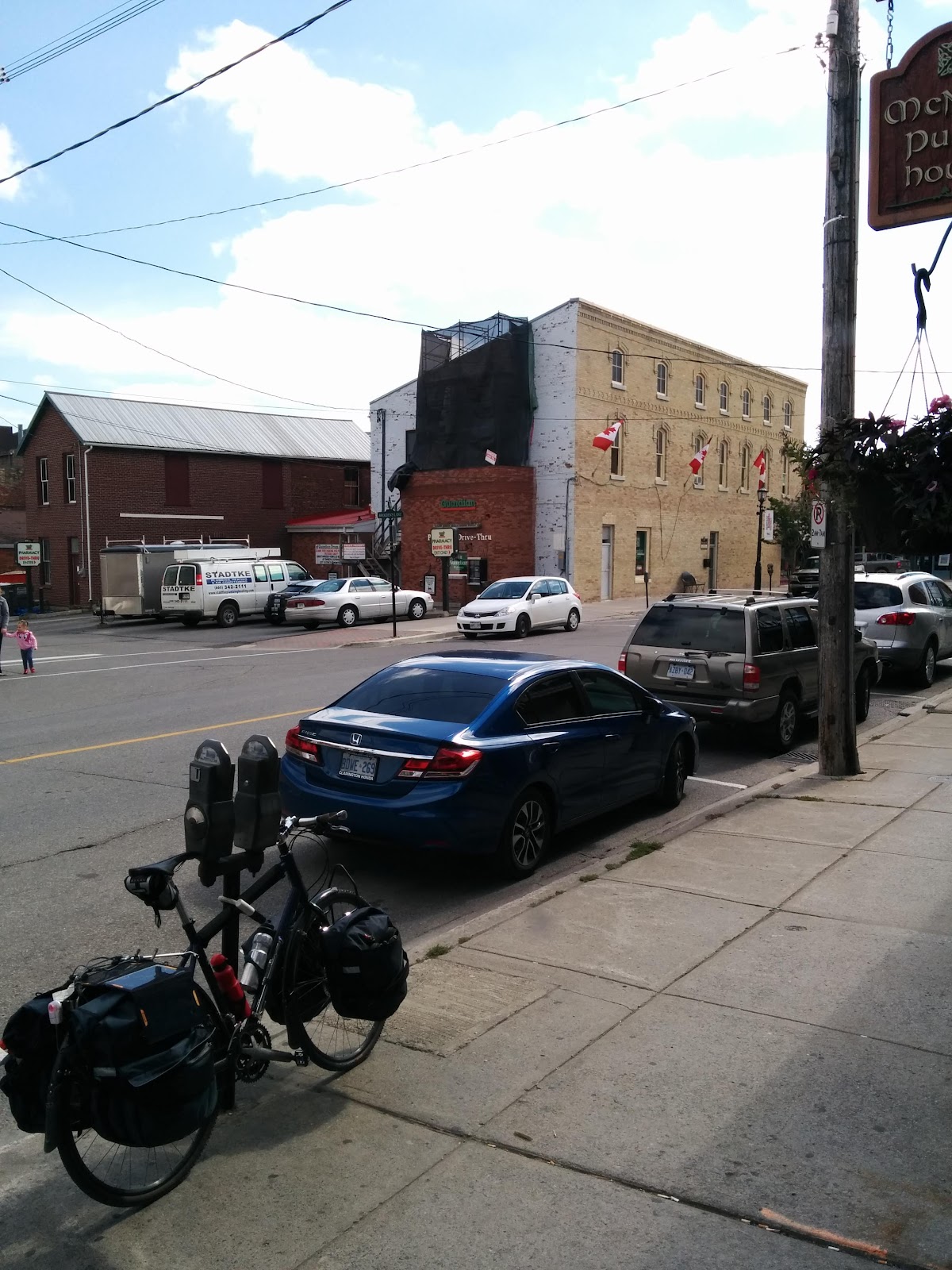 I had lunch at a pub just off the main street. It was nice to sit and be warm away from the wind for an hour.  I was ready to give up on my original plan and tried to cancel my next two camping reservations. I was able to cancel Sand Banks for my last stay, but not that nights stay at Presqu'ile. After the one hour rest and food, plus the thought of failure motivated me to go for it. I had just over 50km to go. 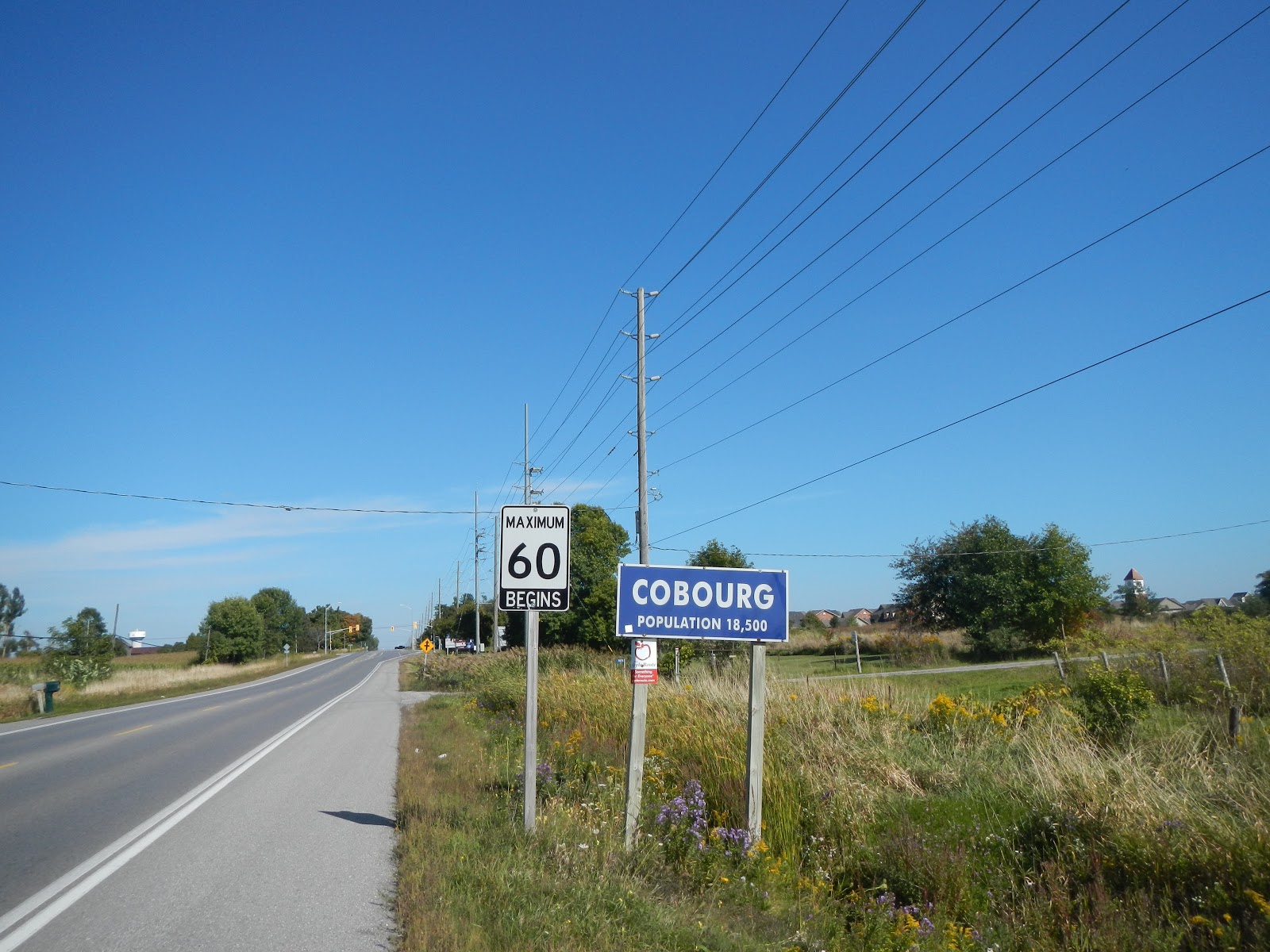 I ended up making it to Cobourg at 3:30pm, 2.5 Hours behind schedule.I went to Green Canoe outfitters in Cobourg, where 2 weeks before, I had ordered a new sleeping bag for +Laura Krick. I then set off to my next camp site. The wind had died down and the going was slightly easier. I saw a lot of fields. 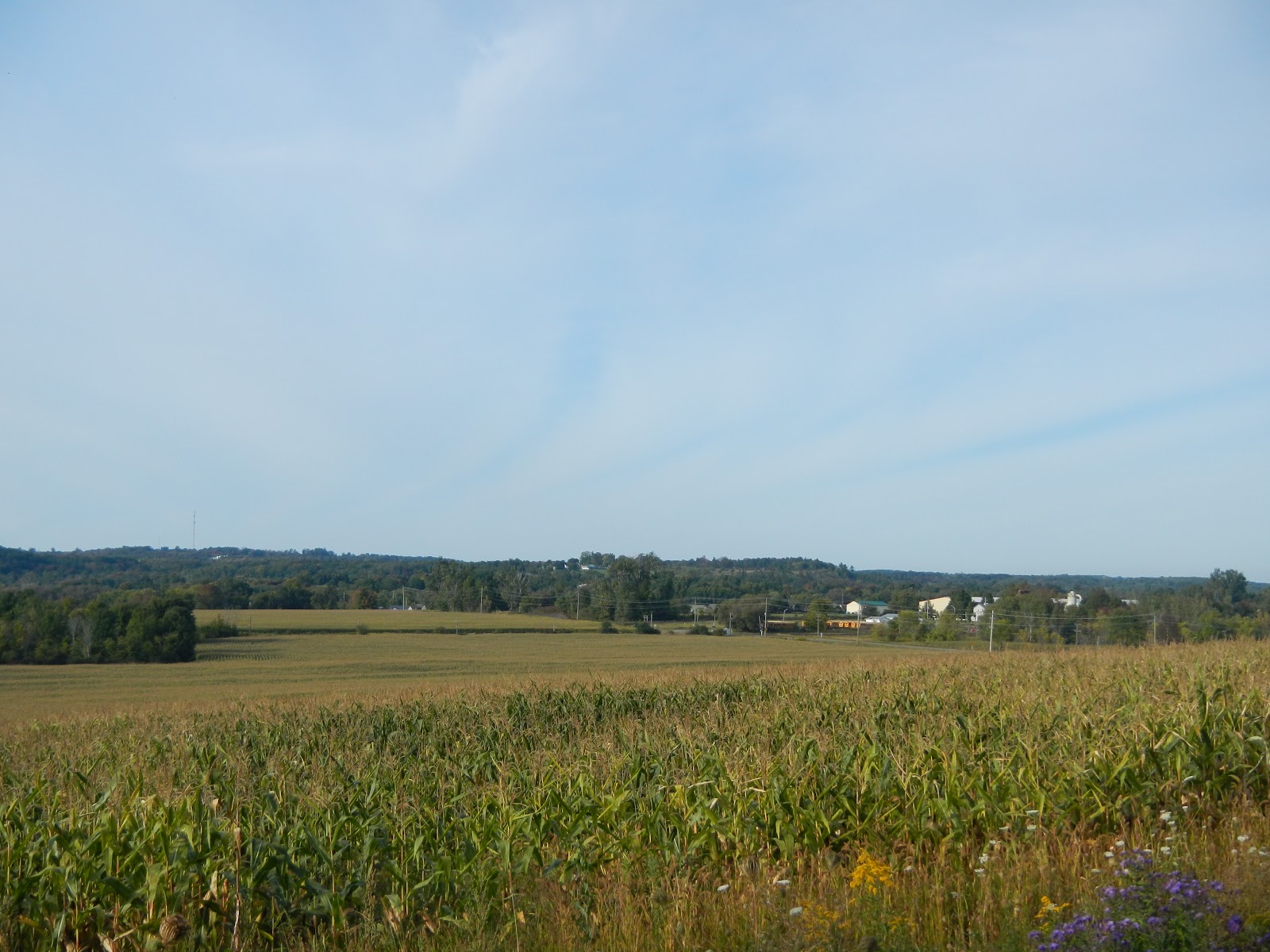 And a lot of views of the lake. 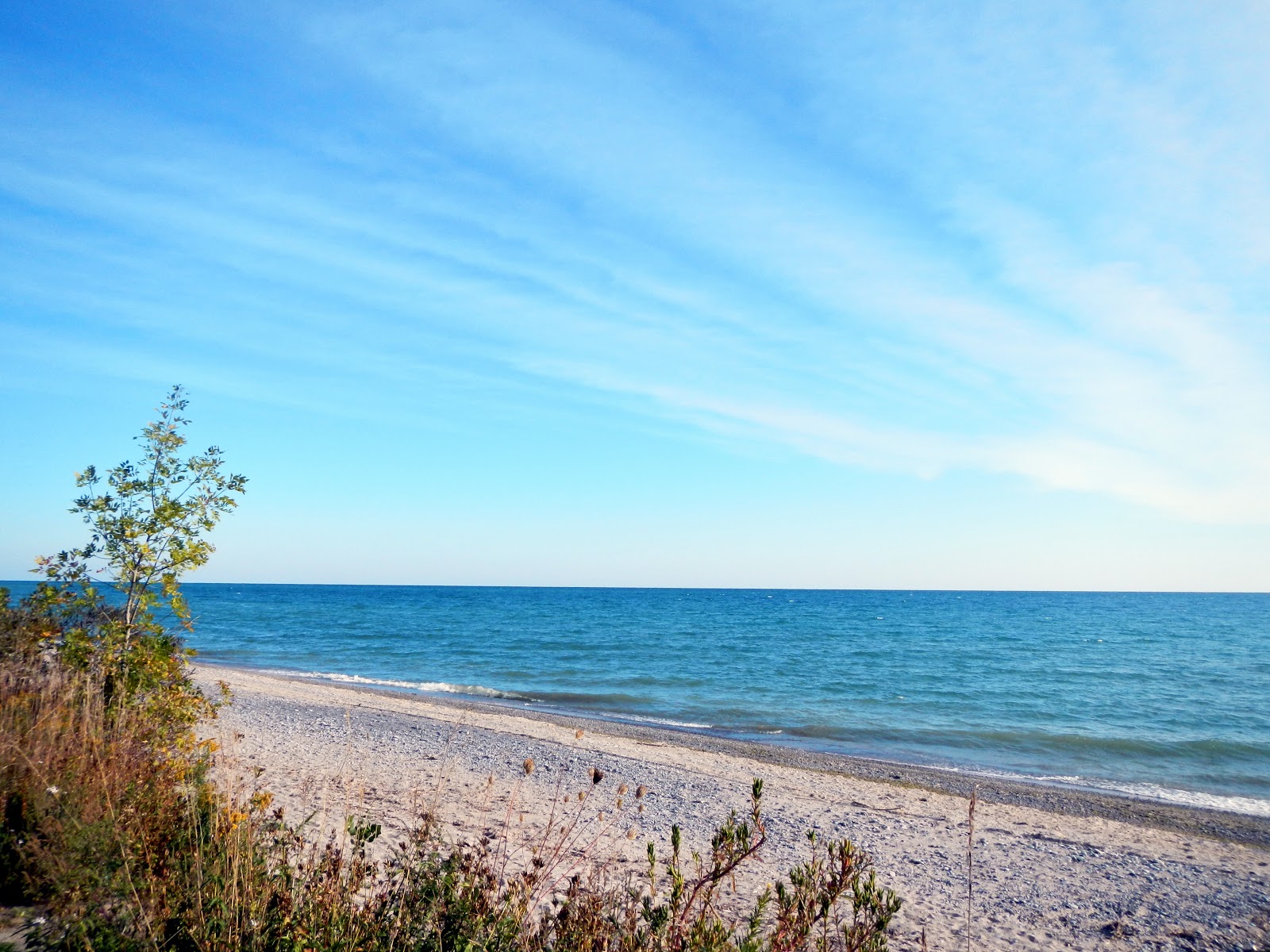 The waterfront trail in these parts isn't well signed, if at all. So someone had gone around making cute heart shaped road signs. Thank you rode sign painter. I love you too. 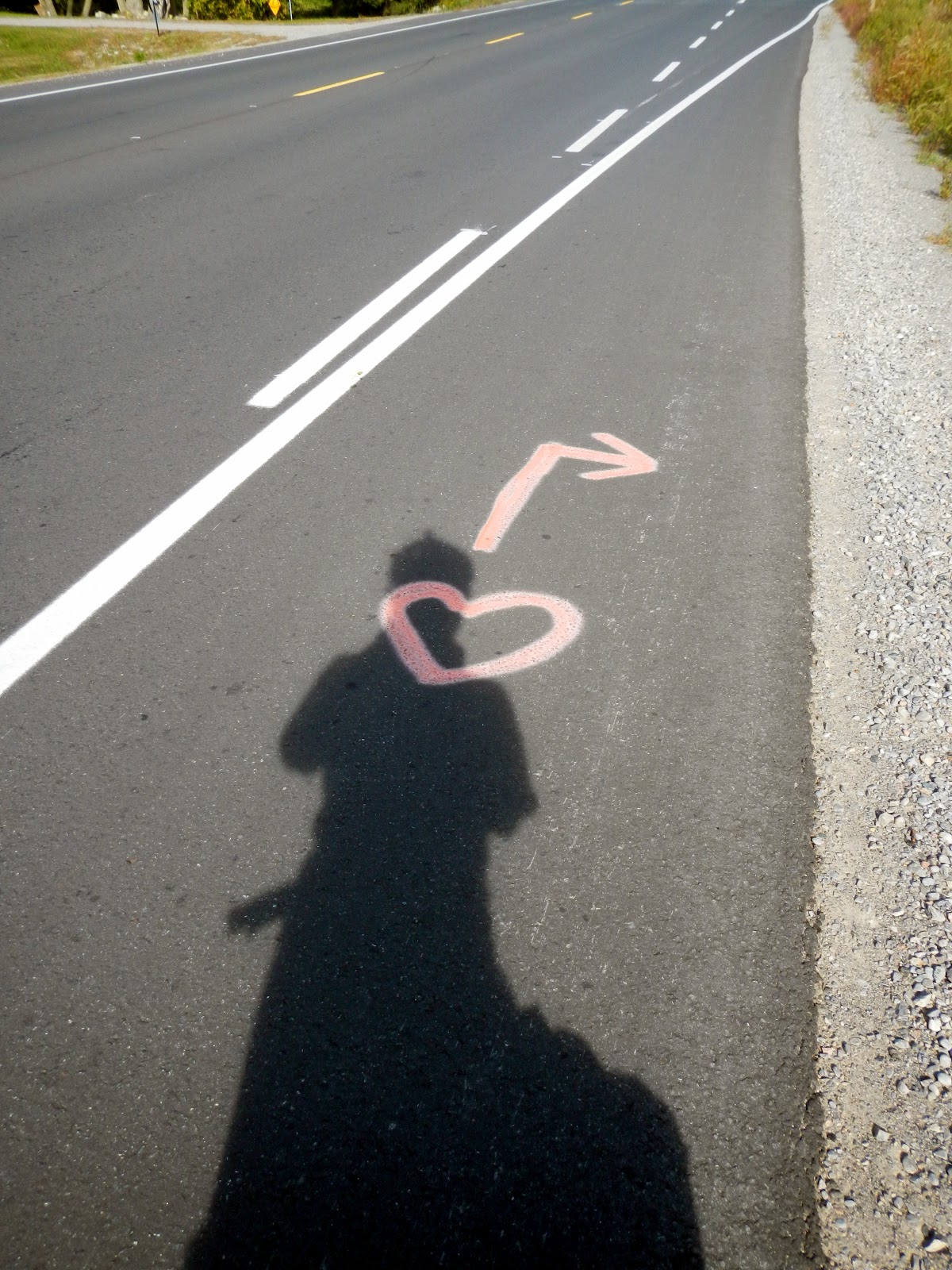 The last 10kms were very hard, but I finally made it. 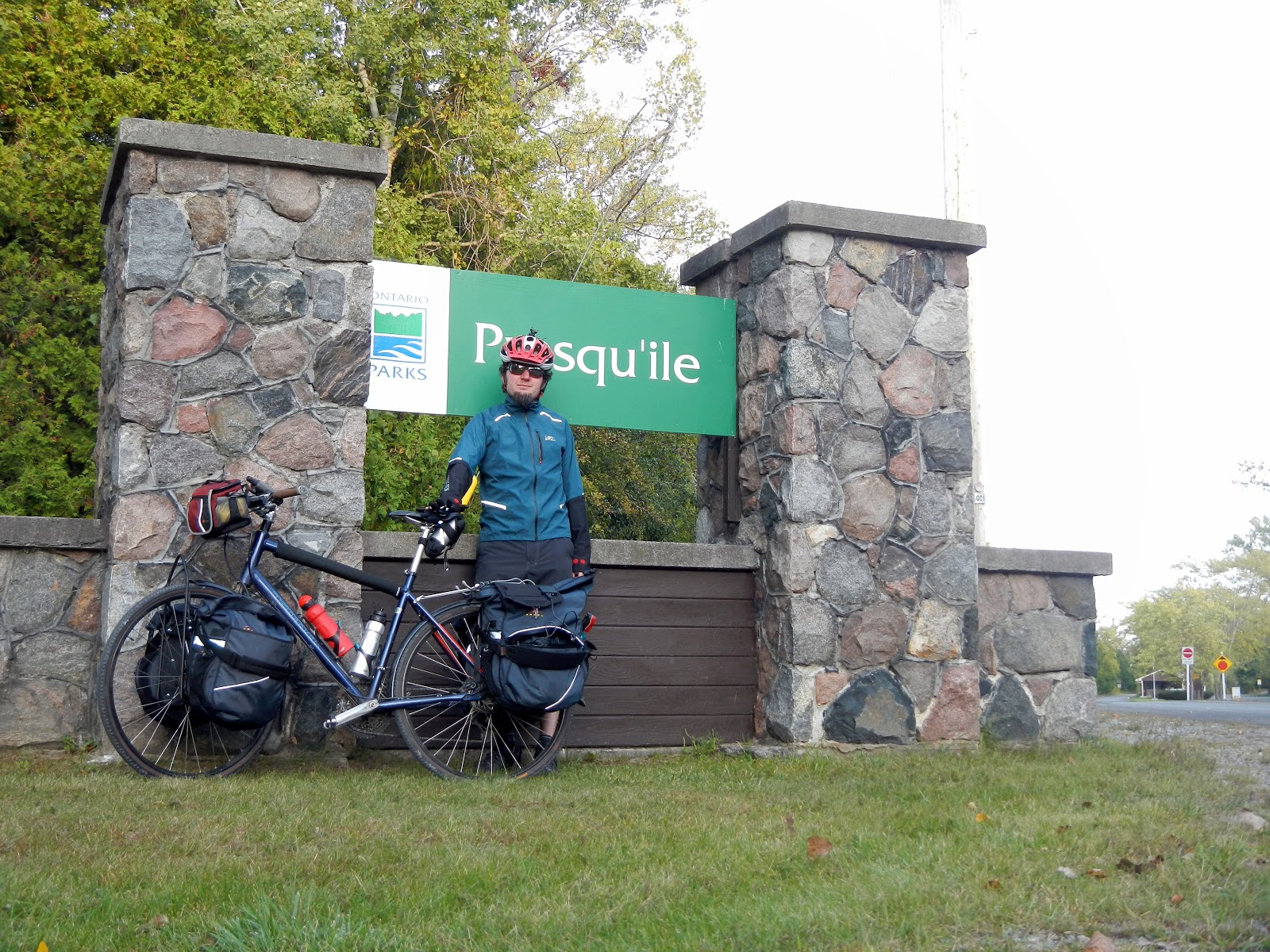 The notable thing about this leg of the tour is that it's also my first metric century. I've never ridden 100kms in a single day before. It would be another 4kms from this sign to my actual camp site. The longest 4kms ever. Presqu'ile caters to cyclists with bike lanes on the roads, bike paths and even offering to drive your firewood to you so you don't have to try to lug it on your bike. 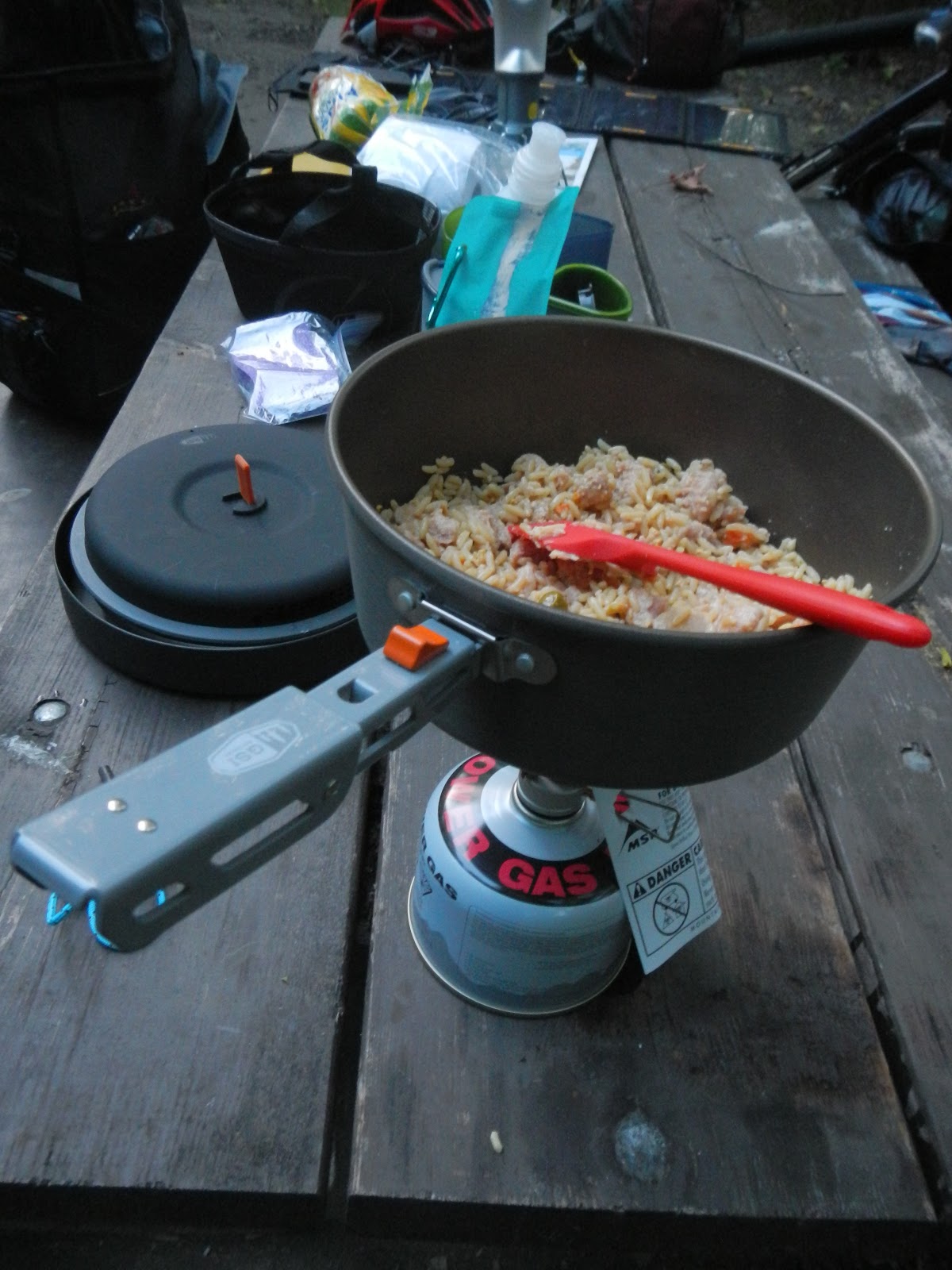 First order of business was dinner. I never let myself get hungry on the ride, constantly downing nuts or energy/granola bars. Still, it was nice to sit down and eat a warm meal. Thanks to +Laura Krick for helping me plan those. The MSR Pocket Rocket stove is very good and compact. Thanks to +Jane Sobil for the camp cookware set.

At this point I realized I was not going to make it to Kingston. Luckily, Laura had agreed to pick me up vs. me taking the train back from Kingston. Laura and I discussed me being picked up a day early. That night was one of the deepest sleeps I've ever had. I don't think I woke up once during the night.


Though the next day I woke up at 7am, and it was overcast but warm. Laura and I sent a few messages back and forth and we confirmed the pickup to happen in Trenton. She had to drop her days plans which was great of her. That night was supposed to rain right into Sunday. Not a great prospect for camping, or packing up. I decided to head out and see the park and the bike paths it had to offer. 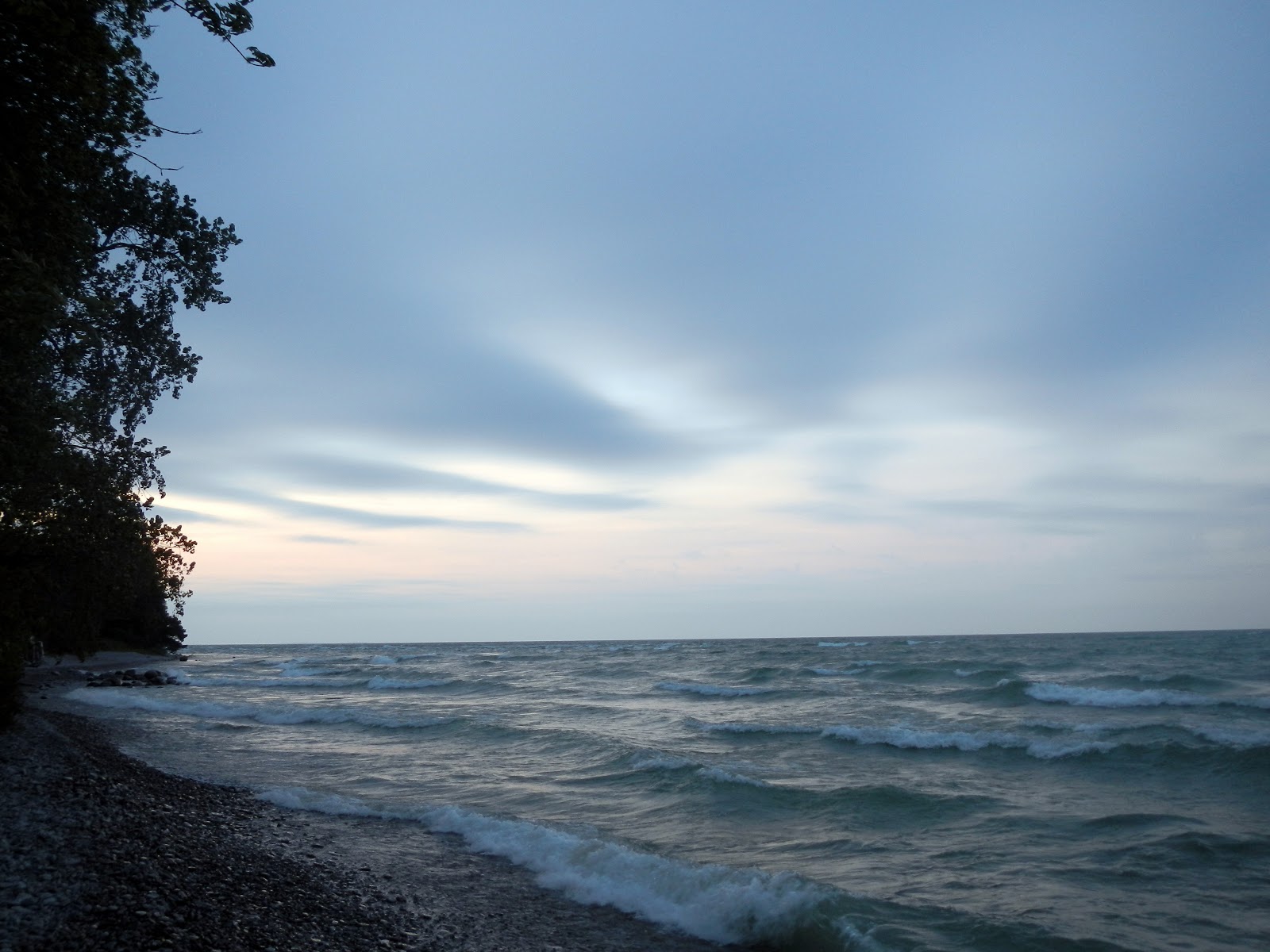 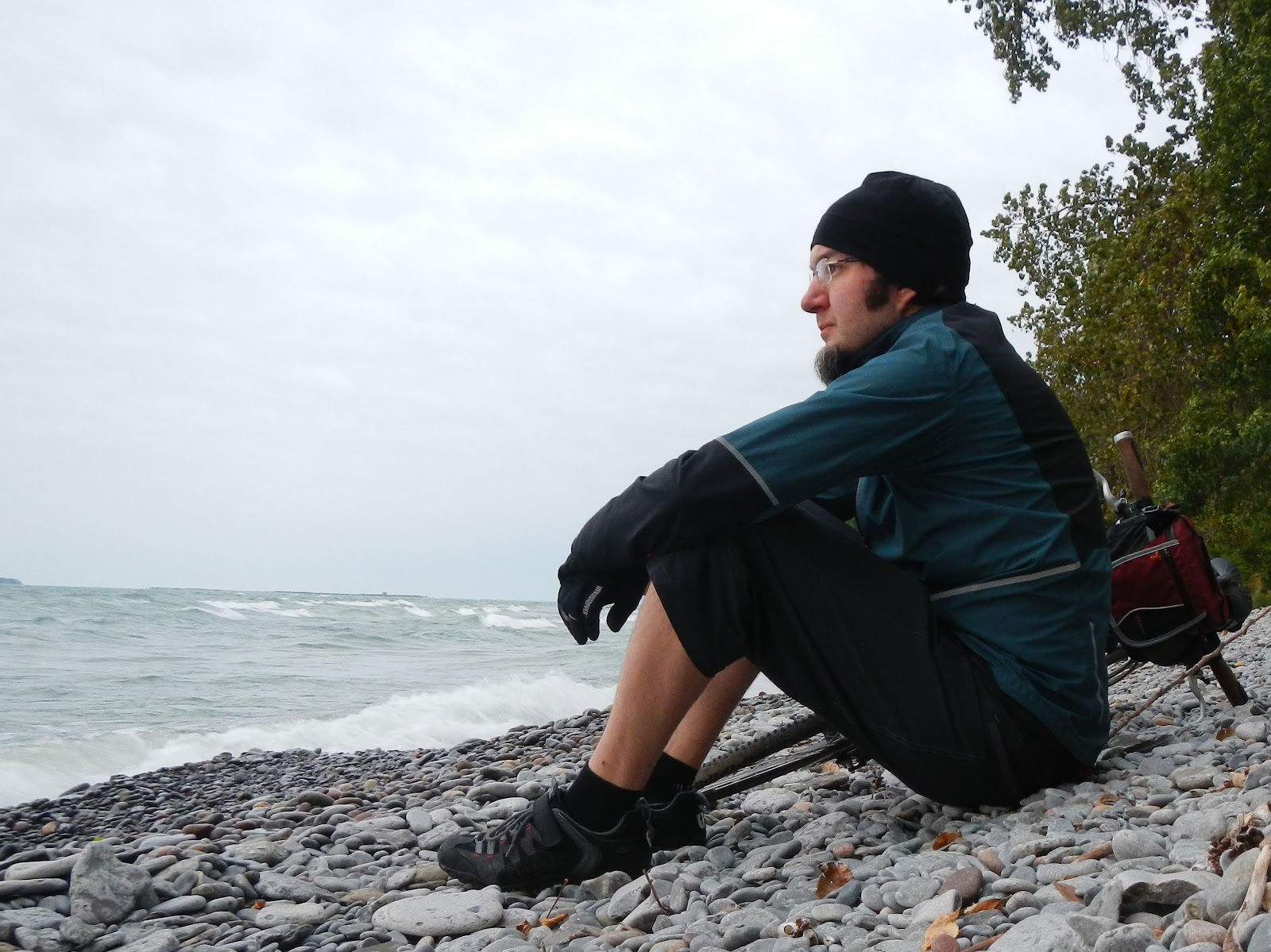 I rode out to the light house at the end of the park. There were a lot of bird watchers all over the park, as the birds like this area. This lighthouse is lime stone covered in ceder. 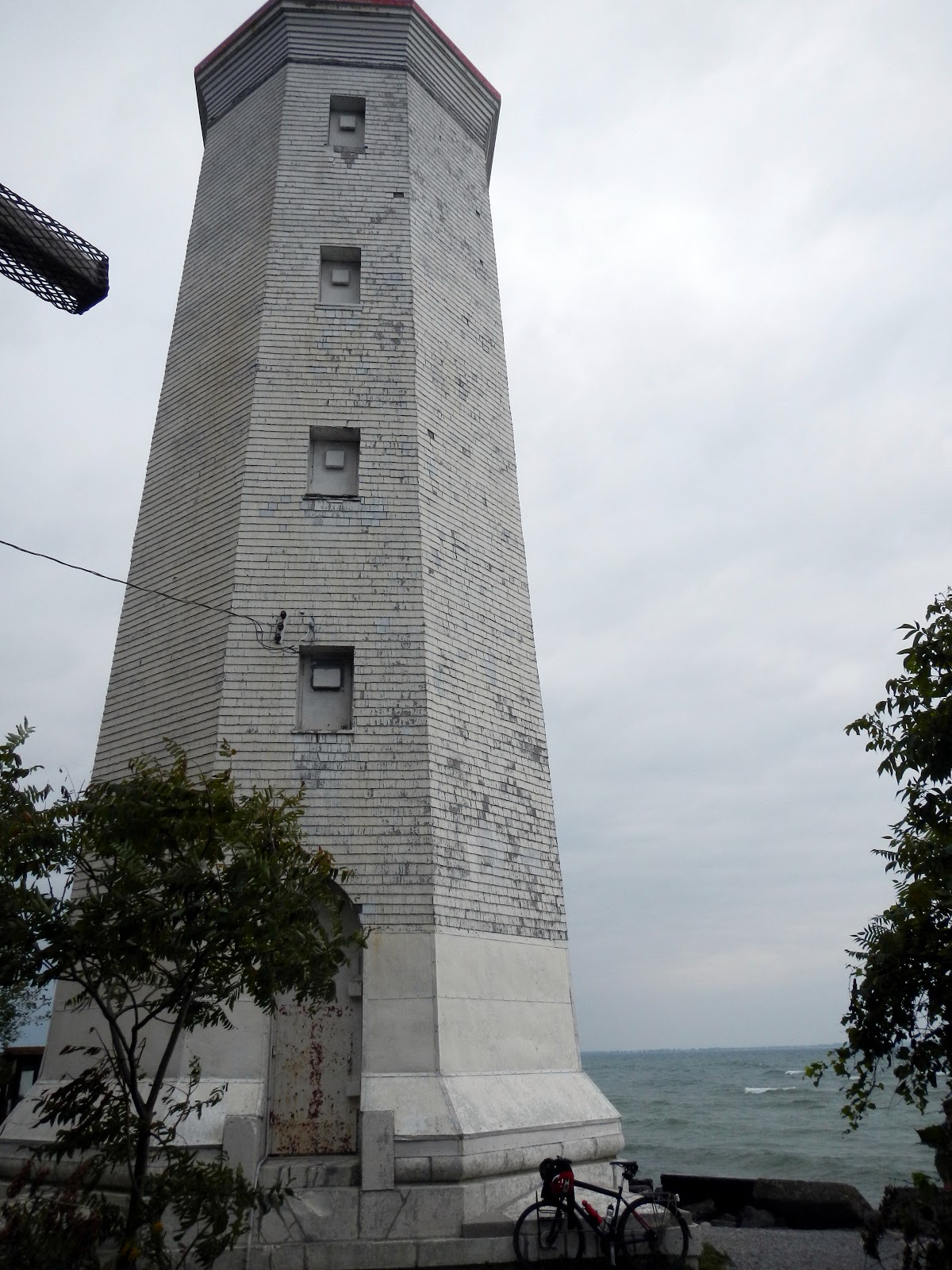 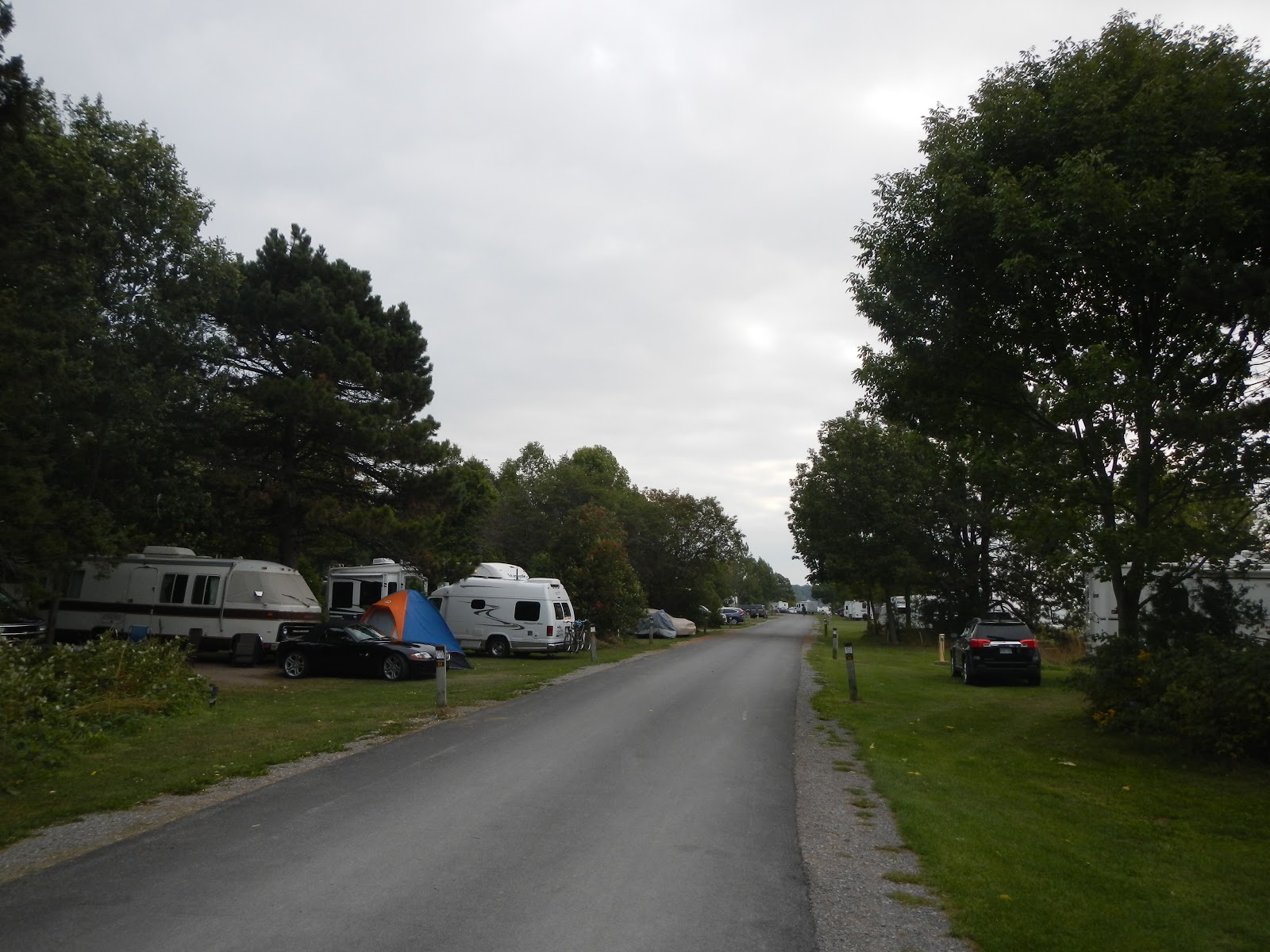 I went back to my camp after riding around. Laura sent me the GPS coordinates of where we would meet because I had screwed up loading maps onto my GPS and only had the basemap and routes for the tour. 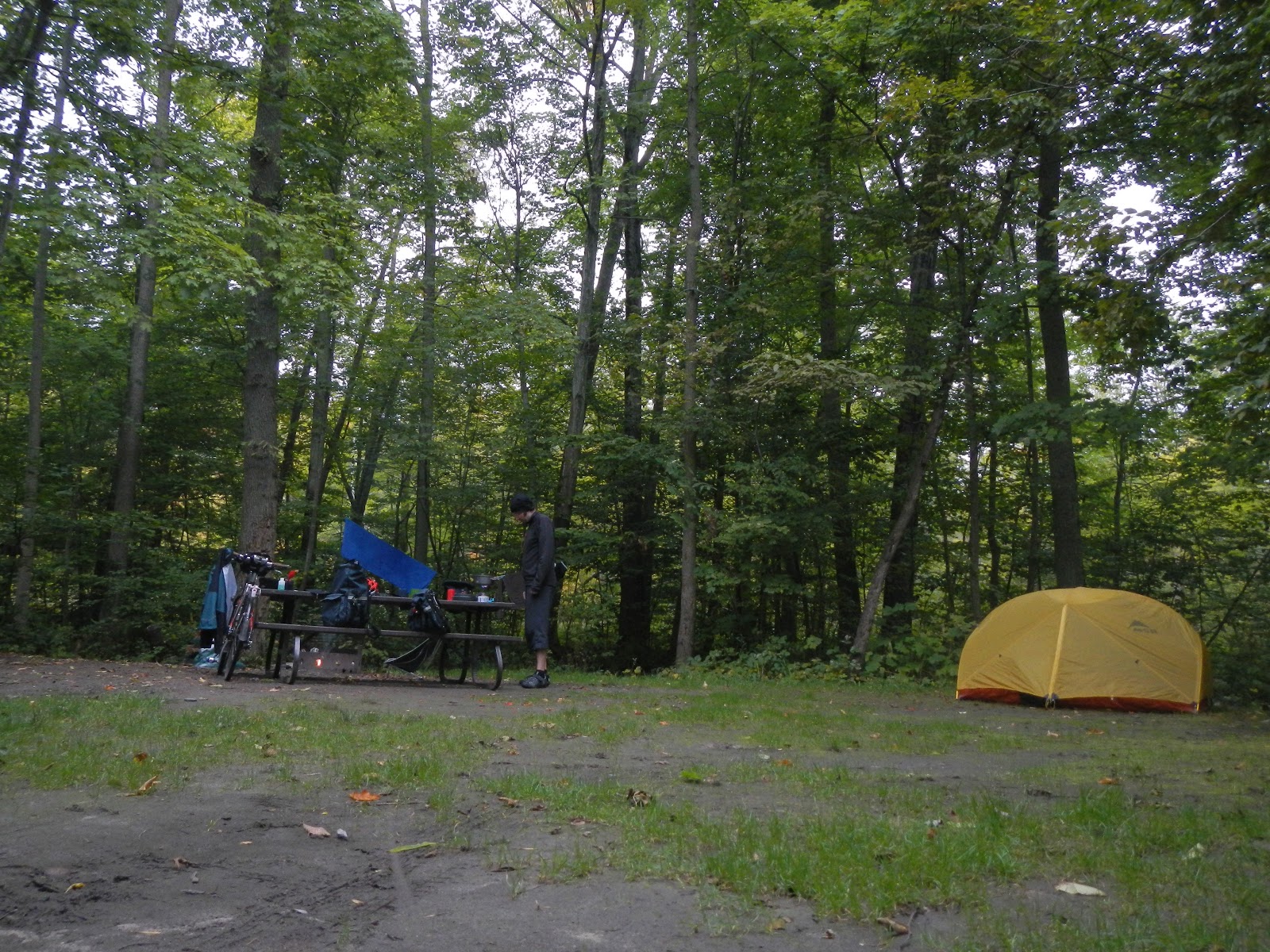 And then packed up and had lunch 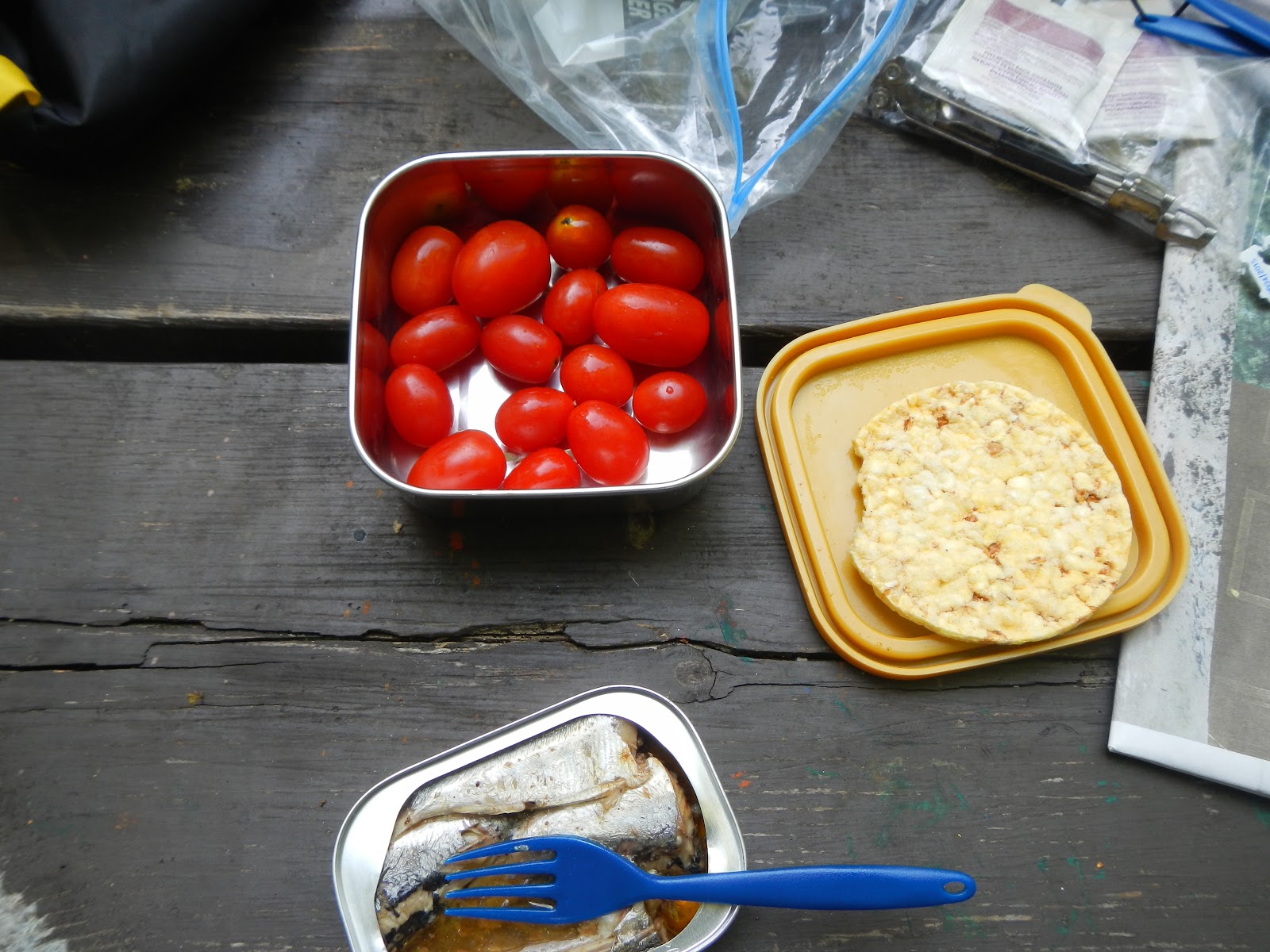 The set off to Trenton, the agreed upon pickup location. The weather was really great by this point. The wind had intensified but changed direction. I was cruising at over 30km/h now. I ran into a paramedic fundraising group biking from Toronto to Kingston! 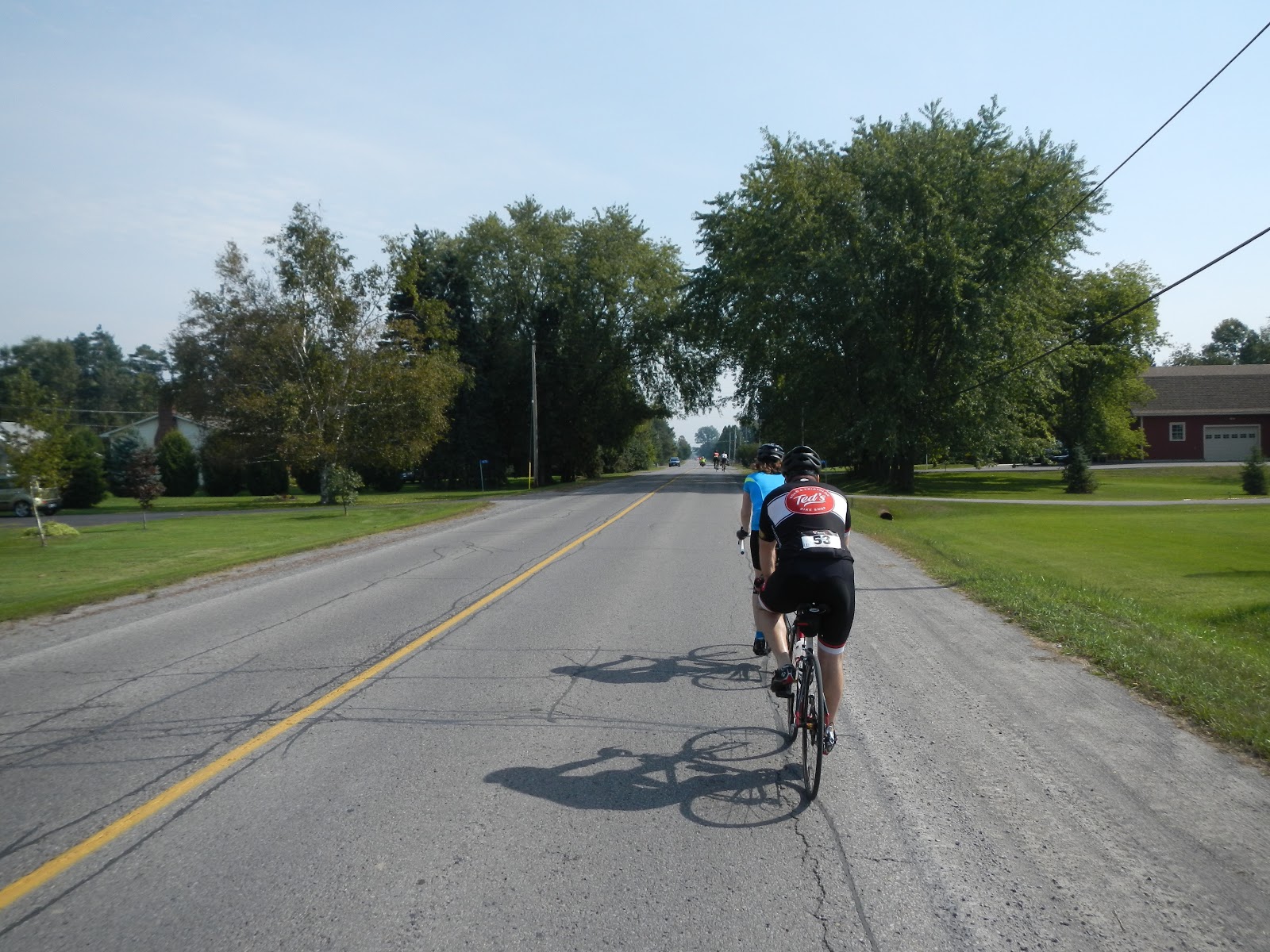 Spent quite a while chatting with some of the riders. They were riding to raise money for a monument to paramedics who have lost their lives. Their ride was a supported ride over two days. I managed to keep up with their pace, even though I was fully loaded until I got stomach cramps from starting out too soon after eating lunch. 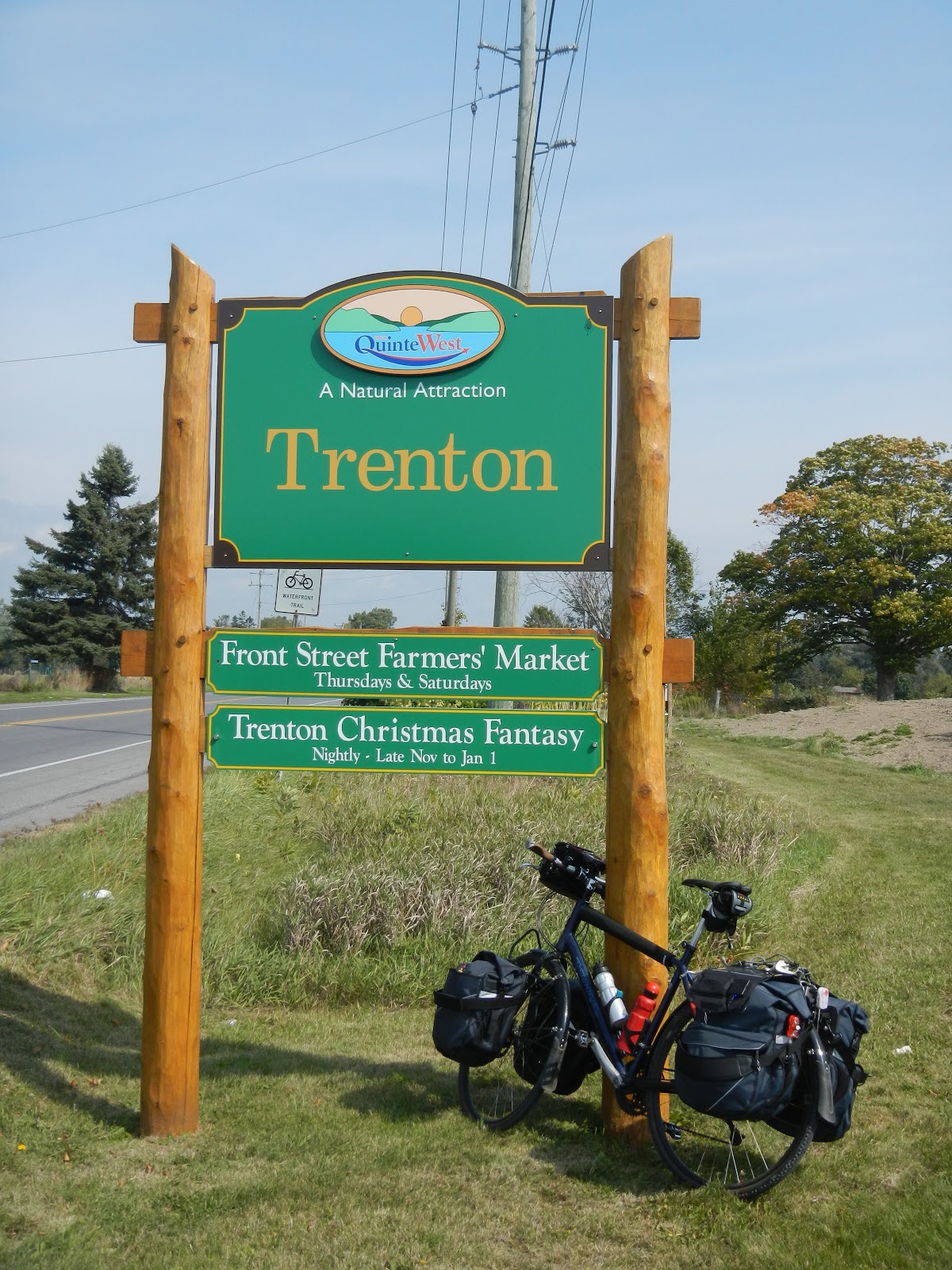 I made it to Trenton with 1.5 hours to spare. I was sad I didn't agree with Laura to meet in Belleville instead. The wind and 25 degree temperatures made the ride enjoyable, unlike the previous day. 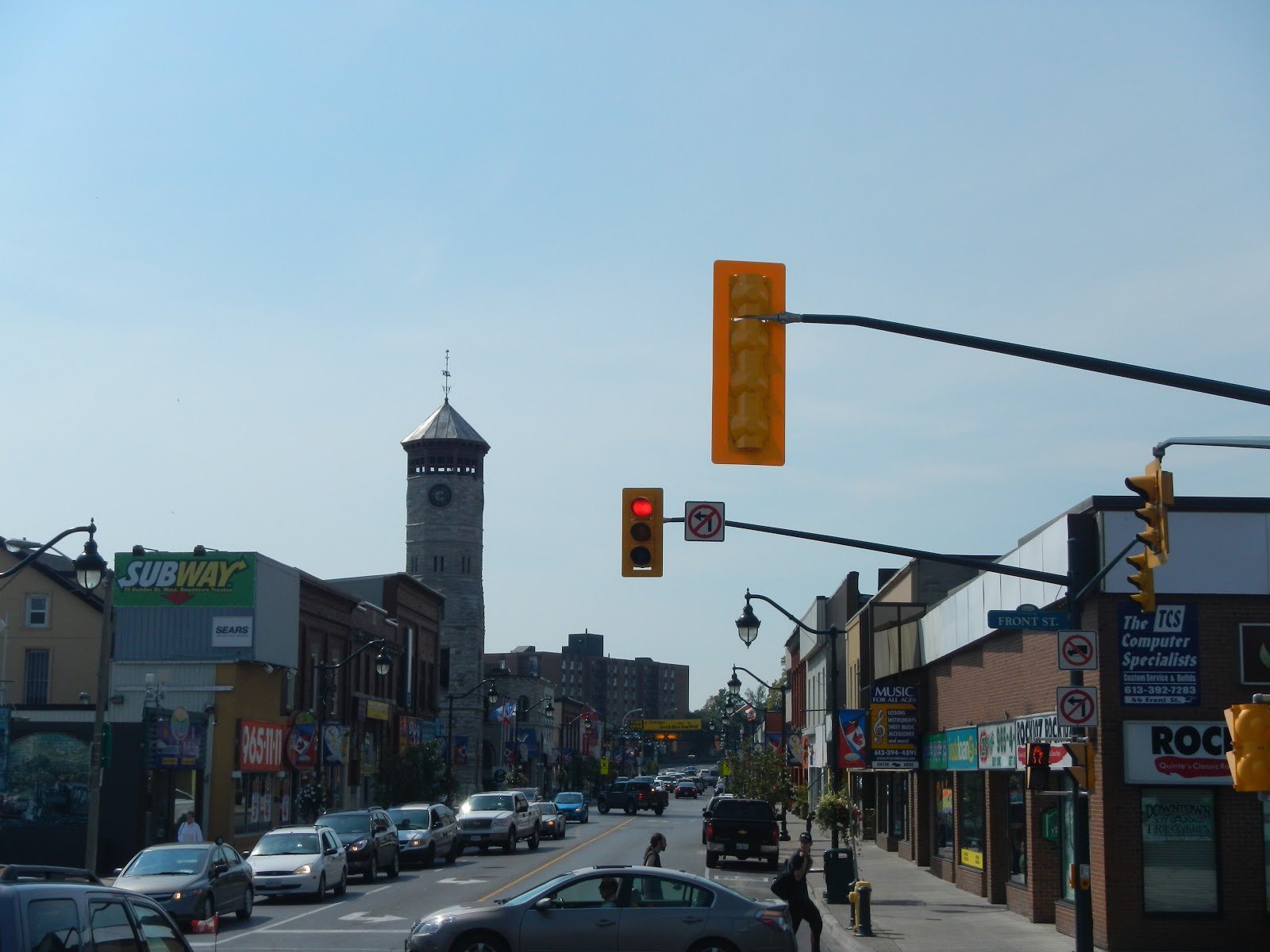 I did get to ride around Trenton and see the town though. at 1:55pm, Laura arrived to greet a very tired me.

Even though I failed in my goal, I'm happy I did this. I learned a lot about touring and my abilities. I look forward to the next one. You can see my entire ride in Strava.

What I will do better next time around

Other thoughts and learnings

One of the things I picked up for this tour are Continental Travel Contact tires. I got the folding versions at an amazing price from Chain Reaction in the UK. These tires have an amazingly low rolling resistance for their size and recommended pressure. I had no flats on the ride. When it was time to traverse gravel or dirt roads/paths, the tires offered enough traction to keep my comfortably controlled with or without load.

I might look into butterfly bars or trekking bars. These appeal to me much more than drop bars on my commuter, and would allow me to continue using the existing shifter/brake leavers.