So my trusty old desktop died shortly after moving into my new house.
While in Michigan on a shopping spree, I picked up the following:

I saved about $140 on buying this stuff in the US. Most of the savings are from the CPU.

System works great except for one big problem. I have to turn off all power management features on the CPU otherwise I hear a very annoying squeel coming from the motherboard. This is apparently a problem with certain power supplies plus this board. Hopefully this is an issue that will be resolved, maybe in a BIOS update. The reason I'm ticked is that this is NOT the board I wanted. I wanted the Asus P6T. Older board, but had all the features I wanted. This board has more features, like SATA3 and USB3. Which I guess will be nice for the future.

Overall it's nice to have a new computer after 4 years. My desktop was actually slower than my X200 Tablet. No longer the case.
Posted by Paul T. at 5:57 PM No comments:

I'm an Adult Fan of Lego. I however, am nowhere near where these guys are:

AFOL A Blocumentary from AFOL on Vimeo.

48 Hours with the Google Nexus One in Canada

I was fortunate enough to get a Google Nexus 1 for a couple of days. I used it as my primary phone using my Fido SIM card. This isn't going to be an exhaustive review. If you want one of those, there are plenty around. However, I thought I would put down my personal impressions of the phone and version 2 of the Android platform. That and my quest for a new phone.

First, some background. I own and use a Sony Ericsson Z710i "dumb phone" as my primary phone. It has hacked firmware installed on it to get around Rogers/Fido limitations. It may be a regular phone but as a phone and MP3 player, it has served me very well for the last 3 years. It also happens to have one of the best Bluetoth implementations of even the latest phones (ie. iPhone). I have been using Sony Ericsson's phones for over 8 years now and am very comfortable with their platform. I also use a 3rd generation Apple iPod touch. I have over time owned and or used several Windows mobile phones and PDAs and and the Nokia E71.

My initial experience with the Android platform was the HTC Dream/G1. The first phone commercially available running the Android platform. Let's just say I was not too impressed. This was also about the time I got my hands on a 2nd generation iPhone to try. Other then the keyboard, the Dream had nothing going for it. It was underpowered running a slow, rushed out the door OS. I dismissed it as a poor first attempt.

Since that time I have been on a quest to find a PDA type phone which was as responsive as the iPhone, but far less restrictive. Unrelated, I ended up with a 3rd gen iPod touch for development reasons. Having the touch convinced me that the iPhone was not the device I ultimately wanted. The reasons for me not getting an iPhone are:

However, the iPhone/Touch have a few qualities, at least in the latest 3rd generation versions that have now also become a requirement for any phone that I buy:

This leads me to several days ago, where I got the chance to try out the Google Nexus One. Let me start off by saying that if your experience of Android was any of the first generation ones, forget them. This is what Google should have come out with a year ago. This is also a negative point. This should have been what they had out a year ago, and today's phone should be as polished and responsive as an iPhone. It's not, but that's not to say it's not as good. It's just different.

The positives of the Google Nexus 1:

As of this posting, the Phone is now available in Canada on both the North American 3G Bands working on Rogers, Telus and Bell and the AWS Bands working on Wind Mobile and the soon to be out Mobilicity.

I did not test it's Edge Data performance on the Fido/Rogers network.
Took only one snapshot with it 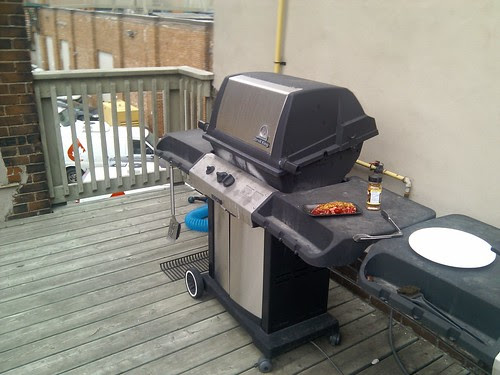 I'm getting very close to finally upgrading my phone.
Posted by Paul T. at 3:52 PM 2 comments: 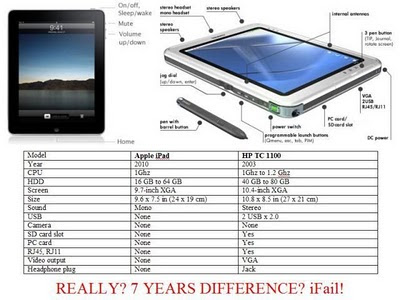 Found on the random Internet.
Posted by Paul T. at 10:08 PM No comments:

Update: Great article in the Ottawa Citizen about Canadian broadband that pretty much trumps this blog post.

An article in the Globe and Mail this weekend talks about how Canadian broadband is actually competitive. This is in response to a report commissioned by the FCC from the Berkman Group on how poor Canada (and US) broadband is compared to the rest of the developed world. This article is complete garbage. I'll go over some of the most glaring errors:

1. No sources, anywhere for their completely made up "facts".
Correction: They list Akamai as a source for download speeds -- thanks Brian Jones

2. It talks about penetration rates being wrong because there are more members per house hold than in Europe, so more people use a line. Then later point out that North Americans are heavier users of broadband than in Europe. Those balance out nicely in my opinion.

3. "Advertised broadband speeds vary from actual speeds. In North America, this is largely a result of “network overhead,” and is quite modest. In Europe, however, the variation is often dramatic." Anyone who has used Internet in Canada knows that this is complete bullshit. My sources are sadly not that representative, but a quick trip to dslreports.com will show you that advertised speeds are most definetly not what you get.

4. "So it is that in Canada, Rogers, Shaw and Videotron all offer 50- or 100-Mbps services, while Novus (using its own fibre) offers 200 Mbps in Vancouver. Bell Aliant has rolled out an ambitious fibre deployment in parts of its territory. Bell Canada has offered fibre-to-the-node technology since 2005..." I'm not arguing with this fact, in that those speeds are possible for a select few, who are willing to pay over $100/month for their Internet. However, the usage limits imposed on these connections are ridiculous. How is the Internet supposed to advance in this country when you are limited to 60GB downloads per month? I can easily break 100GB on my 6Mb connection without even trying. Oh, I know, buy consuming your video (TV/ Movies) from the other services that Rogers, Bell and others are providing. Of course, what was I thinking.

5. "Where the Canadian picture looks less favourable, however, is in the mixed signals that the CRTC is still sending on prolonging and extending regulatory policies that may, at best, have made sense in the days when we could not see beyond the old copper-wire telephone network." And here we have the true purpose of this article. If this quote doesn't scream "This article is payed for by the large telco and cablecos" I don't know what does.

It's a shame that the Globe and Mail, a newspaper my household subscribes to, and one that usually has good, well balanced articles, would print what is obviously an advertisement from the companies that have the most to loose from real change and innovation in this country.
Posted by Paul T. at 10:37 AM 4 comments:

OK Go - This Too Shall Pass - RGM version

Awesome video from OK Go. Not a huge fan of their music, but I love their music videos. For those who don't know, they've been fighting with their label to have the right to share their videos on the Internet.. I guess they made this one themselves. With help from Synn Labs, a group of Makers.