I've been running Windows 8 on my primary computer for a few days now, and I ran the Preview version on my ThinkPad Tablet for a month or so earlier in the year. I have a lot of mixed feeling about Windows 8. First of all, I want to commend Microsoft for what they are doing here. Creating one unifying interface across all their devices is, I believe, a good idea. It's also an incredibly hard one to pull off.
My First experience with Windows 8 was with the preview running on my ThinkPad X200 Convertible Tablet PC. I was pleasantly surprised with how well it ran. My Thinkpad is nearing 3 years old and I was very impressed with how well Windows 8 ran. In fact, I feel that Windows 8 is faster in most ways over previous versions of Windows. What ended my use of Windows 8 Preview on my tablet was not the OS itself, but lack of support from Lenovo. The X200 line is one generation too old to have Windows 8 support provided by Lenovo, and key drivers are never going to be available for the tablet, leaving Windows 7 as the last viable OS for that tablet, even though it ran perfectly well. What did work was everything else other than hardware specific features. Importantly though, the touch and Wacom pen interfaces worked perfectly. In fact, Windows 8 was the first time I really used my touch interface on a regular basis. Microsoft did a really good job making a touch friendly interface for Windows. The problem with Preview at the time is that a lot of the stock, touch friendly apps, were not finished. Email didn't support iMap as an example. Still, it was a good "preview" of what was to come.
Now, a few months later, we have the full version of Windows 8. Though things have come along since the preview, I can't help but feel that things have not fully baked. Keep in mind, that the things I'm about to complain about, nobody else is doing. This is a key point, not Apple nor Google are trying to make an OS that interoperates with a host of other services as seamlessly as Microsoft is trying to do. That being said, Microsoft has to, as they are very late to the game.

Let's start with Email. Email is rather important to a lot of people, and in some cases, the most important thing a computer can do next to web browsing. Keep in mind that this app is necessary for someone using Windows 8 on a touch based computer. The email app lets you easily add Gmail, Hotmail, Facebook and traditional email services. Email works well enough. The latest versions of the app which has only been out for a few days now supports proper threading. All the configuration options you need are there. If you've configured your Google account, you can also choose to use your Google contacts along with email, a huge plus. My biggest, and really only complaint with the email app is that it's Metro only. I'll cover this later. The only real problem though is that for me, an email app without integrated calendaring is useless. Microsoft has you covered with the calendar app, however, this is where the above integration falls short. You can only use your primary calendar with the app.Sadly I have several. Not only that, but I also want to see other peoples calendars that I have subscribed to. To be fair, official word is that this is Google pushing back and not a failure in Microsoft's implementation. In fact, if you subscribe to any of the iCal feeds in your hotmail account online, you'll see all the calendars in your calendar app. However, they will not be editable, nor will you be able to create new events.
The contacts app is another app that tries, but fails to integrate many services. It's biggest problem is contact collapsing. It will show you three of the same person if they have three different ways to get a hold of them. In addition to this, the contact app is also the integrated twitter app, which makes it a bit confusing.
There are other apps like weather and stocks, stuff I don't really care about so will not get into.
Other than Internet Explorer 10 however, the biggest issue with all these apps is that they are Metro only. What this means, that if you are using Windows 8 on your desktop, with a nice big 24" or larger monitor, you have to use these apps in full screen. This is incredibly frustrating as I value my information density. A lot of these apps exist in "Windows Live Mail", a classic desktop app that you can download and install free from Microsoft, but it lacks integration and some of the features you find in the Metro versions, like being able to edit Google calendars as opposed to just viewing.

The Desktop world and the Metro world are separate. Metro apps are not docked in the start bar, nor do Metro apps fire notifications to the start notification bar, and vice versa. This is incredibly frustrating, as you could be working away in a desktop app and miss notifications. If you have multiple monitors, like I do, you can have one showing your Metro start menu and apps, while the other is all Desktop business. This isn't actually a bad idea and works rather well. I could see this working exceptionally well with a Surface Tablet plugged into an external monitor.
By now, I's sure you've heard that the start menu is gone. This is not a deal breaker in the slightest. If you put your mouse into the bottom left corner of the screen and click (as if the start menu was there), you get the Metro home screen, which is in essence your new start menu. Hitting the windows key also brings it up, just like your start menu. In fact, all of the key actions and mouse actions I expect to work from years of using Windows PCs continue to work, the only difference is the visual appearance of it all. That visual appearance though is a bit disconcerting. Windows 8 seems to be pushing me to be a single task and a time kind of person. No more status bars, no more widgets telling me the weather outside, it's all one app at a time. This works great on a phone, works OK on a tablet, but is just kind of annoying on a desktop with a large monitor.

It has only been a few days using Windows 8 as my primary OS on my main computer, and so far I don't regret making the upgrade, especially for the low price that Microsoft is pushing the upgrades. Fundamentally, I think the changes to Windows 8 are good, and the ones I don't like there are work arrounds  The built in apps will get better over time and will be updates through the Microsoft Store. Most importantly though, Microsoft has managed to do something that generally does not happen with these sorts of upgrades, they made my computer feel much faster. Windows 8 boots considerably more quickly, and just feels snappier and more responsive than any other version of Windows before it. This alone as why I will happily stick with Windows 8.

I've recently switched to using the Microsoft Touch Mouse. It's a Windows 7+ only piece of hardware. The entire top front of the mouse is a multi-touch sensor. It only has one physical button (the whole thing, ala the Apple mice) but based on where you press down it registers either a left or right click. The hardware is amazing, up to Microsoft's usual high standards of build quality. The software however is lacking in many ways. It has huge potential. I'm hopeing that with udpates the experience will get better, but so far Microsoft has failed to deliver. As it is, it's rather frustrating to use for anything but basic mouse actions (at which it excels). 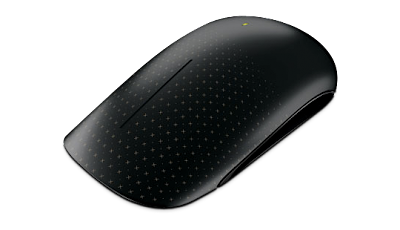 My primary pointing device is a Logitech Trackman Wheel. I switched to using a thumb based trackball after using a full handed trackball gave me worse RSI than the mouse I was trying to get away from. However, I find switching between the two on a regular basis works well for me. The main source of pain in my arm is the muscles responsible for finger lifting. This is why the thumb based trackball works so well for me. My fingers rest on the buttons and only my thumb is used. The Microsoft Touch mouse has no buttons. So to register the difference between a left and right click, your fingers must be off the mouse so that a touch, not a press, can be registered before you press down to click. This is horrible ergonomics. In fact, everyone who tried this mouse said that right clicking was next to useless. That, and the complete lack of middle mouse button was incredibly frustrating for me. Overall it was a nice design exercise for someone in Microsoft's hardware division. Ultimately though it fails to be a useful pointing device.
Posted by Paul T. at 9:09 AM No comments: