Looks like I and many others were wrong. It doesn't look likely sooner than March now for a Nikon D3. 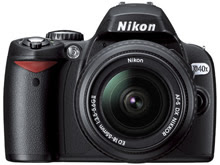 I have a negative bias towards the D40 itself. This camera represents another nail in the death of Nikons backwards compatibility. Not only does this camera not meter with pre-AF lenses (as has been the norm for Nikons lower end bodies for some time now), it also doesn't Auto Focus with pre AF-S lenses (screw drive AF doesn't work). The feeling of "screwing the customer" continues with the D40x. Sure, this model doesn't replace the D40. It's more expensive and will be sold along it. They should have called it something else. Every D40 owner I know is pissed (even though they know it costs more).

The other problem I have with this camera, is I admit, a reality of todays consumer digital camera market. There is NO reason for this camera to have 10 mega pixels. In other words, no reason for it to exist. Some people have floated the idea that the 6MP sensors aren't going to be made anymore. I don't buy that. The real reason this camera exists, is because the Canon Rebel XTI has 10MP and Nikon did have about a $400 price gab between the D40 and the D80 body they could fill. Sadly, most consumers don't realize that they don't need it, nor even want it. More megapixels just means less shooting buffer and more storage needed. However, I hear all the time about how people would rather get the Rebel because it's got 10 MP, it must be better... right? *sigh*

If you plan to buy the 18-200mm VR Nikkor and attach it to this camera, go ahead. If you're interested in photography as an art, please buy any other Nikon except for this one, one that can AF with classic Nikon AF Lenses.

Whine, whine... Have you played with a D40? The interface design is super-friendly, and besides, I doubt the market segment they're chasing here would ever put a classic fast prime on it.

I have used the D40 on many occasions. I've shot maybe a few hundred photos with it.

It is indeed as you say, a well layed out camera with a very appealing size and surprisingly comfortable for that size.

However, I would NEVER recommend it to anyone. The only person I know that made the mistake of getting one of these cameras regretted it about 4 weeks after he bought it by buying a 50mm f/1.4D and not having AF. Combined with the D40s tiny and dim view finder it makes for some very miserable manual focusing. Especially in poor lighting conditions.

You are correct, that the market segment that Nikon are going after with this camera is more interested in the 18-200mm VR super crappy zoom than primes. But the reality is that a lot of people who want to get into photography someone seriously end up buying this camera because it's cheap and they trust the Nikon brand. I'm making a post right now that also deals with another related issue.

Anonymous said...
This comment has been removed by a blog administrator.
12:29 AM