Canadian Wireless Carriers find out new ways to screw you by charging for SMS messages received. 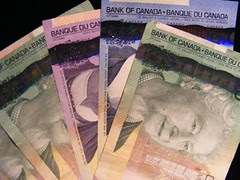 In the battle of the Cell Phone carriers, during the release of the Apple iPhone, Telus and Bell have found new ways to nickel and dime you by charing you for text messages received. This is a bad move considering how many people will flock to the iPhone (more on this later).

It's bad enough that in Canada you have to pay for calls received.

From an article on this SMS Charge in the Globe and Mail I de-construct the quotes made by each companies PR people.

From the article:
“The growth in text messages has been nothing short of phenomenal,” wrote Telus spokeswoman Anne-Julie Gratton in an e-mail to The Globe and Mail, referring to the latest statistics from the Canadian Wireless Telecommunications Association that pegs the number of text messages sent in Canada at more than 45.3 million per day.

That's right ladies and gentlemen. The ENTIRE Canadian market (as far as Telus is concerned)[Edit: As far as a trade group representing Bell and Telus is concerned] has to send a WHOPPING 7MB of data around for SMS messages. Now granted, there are headers and such. Overhead if you will. Lets be generous and double that to 14MB.

But we're not done.

So anybody who's complaining about the data rates from Rogers, just think, you're paying $948 per kilobyte of data sent when you SMS.

“This volume places tremendous demands on our network and we can't afford to provide this service for free any more,” Ms. Gratton wrote.

I wish Ms. Gratton would be eligible for jail time for outright lying. I know, I know it's just her job and she's probably a nice person. There is no way in hell this makes even the smallest blip on either carriers network. It's a pure Money grab.

More from the article:
“Remember that almost all major North American wireless carriers, including in Canada, have taken this pricing approach,” wrote Bell spokesman Jason Laszlo in an e-mail to The Globe. “In fact, most carriers in the U.S. now charge 20 cents.”

This is awesome. Yes, well, the USA is slowly being turned back into Ma Bell land where there is only a few companies. What about comparing yourself to the rest of the world? As it is SMS charges are a scam.

If you think this is as stupid as I do. If you beleive that these companies are outright lying to make more money of people who don't really have a choice. Please consider supporting the NDP to put a stop to this nonsense.