Quick impressions of the Canon 5D vs. the D200 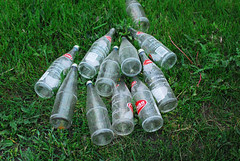 Bottle Art
Originally uploaded by tracer.ca
A lot of people say it's kind of silly to compare these two cameras. I disagree. Even though technically, the 30D is the direct competitor to the D200 it's not really. Mostly from a Nikon shooters perspective, the 5D is the only camera worth switching for.

There are many technical comparisons of the D200 and the 5D on the net. I'm not even going to attempt to be one of these. This is something different. This is just the joy of using a camera that I get from having directly compared these two cameras. I know that the IQ (Image Quality) of the 5D is one of the best (if not the best) in the 35mm DSLR arena. There is no comparison there. I'm talking about the rest of the camera. Now some may argue that IQ is the most and only important thing. This post is not for them.

For those who don't know. Canon and Nikon used to work together. Nikon made the lenses and Canon made the cameras. At some point they split. Strangely, some may argue that Canon still make the better camera, while Nikon the better lens. This all depends on what you consider the "better camera".

Whenever I talk about Canon vs. Nikon. I describe the two like this: Nikon is an optical company, Canon and technology one. Sure enough, looking at todays camera marketplace, Canon has the superior sensor and an army of image stabilized lenses. Nikon on the other hand has beautifully crafted camera bodies and in a lot of ways superior optical designs for their lenses.

And now back to the main point of this post. Holding the 5D for mere minutes you get the sense that it was designed by... well, an engineer. The D200 (or any Nikon Camera) feels like it was crafted by a photographer. Someone who realizes that not only does the camera have to take great photos, but it also has to feel comfortable in the hand for a days worth of shooting. Canons don't. The 5D is not the worst offender from the Canon line, but it's not great when compared to almost every other DSLR body I've tried (which includes Pentax and Olympus as well as Nikon) The hand grip feels awkward and far to boxy. My palm felt as if something was trying to dig into it from the camera.

Then there is the UI (I mean the physical one, not the digital one). Now, admittedly, I've been shooting Nikon cameras for over a decade, so there is a strong biased here from a "what I'm used to" perspective. But I can't help wondering about Canons choice of a single dimensional scroll wheel to move through two dimensions of focus points. Or the completely out of the way power switch.

Ironically, I can use any Nikon F-Mount lens with a simple adaptor on the 5D with great results. With the D200, I can use any AI or newer F-Mount lens on a D200 without having to use stop down metering. But, back to my earlier point, the 5D has better technology, in this case a full 35mm frame sensor. There are those who would argue that FF is a dead issue and Nikon has done a great job convincing a lot of people that this is true. I don't agree. Nikon has done an admirable job with lenses like the 17-55mm f/2.8DX. Their cameras are economical as shown by the 2x price difference between our two bodies here. But there are many other examples where the DX lenses did not compare. Take the 17-35mm f/2.8D (which I adore) compared to it's DX equivalent, the 12-24mm f/4DX. There really isn't much of a comparison. Then one looks at the prime offerings and things become even worse for the DX form factor. Sure, things may change. It's rumoured that Nikon is coming out with a wack of prime lenses this year to fix this, but it's hard to wait.

So yah, the 5D has the best 35mm DSLR sensor on the market. It's low noise at high ISO, and full 35mm frame coverage are great. If only I could have it in the otherwise superior D200 body.
Posted by Paul T. at 12:14 PM

Having used both recent Nikon's and Canon's very extensively, I'd have to disagree on the ergonomics. Both have very distinct pluses and minuses, but are generally equal.

On the AF point issue, Canon offers two ways of changing, either by use of the joystick, or using both wheels (the main wheel controls horizontal and will scroll through all points, the dial on the back controls vertical selection).

Frankly, I hate Nikon's AF point selection method (And Pentax's too, since it's the same) and normally leave my F100 set to centre point only (As I did with my D50 and F65 before it). The Canon methods give you the option of both styles (my 10D lacks the joystick, so I'm stuck with the wheels, which works for me).

That said, I generally describe the difference between the 5D and the D200 as 'more sensor or more camera', suggesting the D200 to those who need to upgrade camera capability and the 5D to those who want higher image quality.